BISF House of My Dreams in Braintree Essex

Hello, I'm currently buying a BISF house in Braintree, Essex.
It's my first house and I want to do a huge renovation.
I have read through the entire forum and It's amazing.
The first time I heard about BISF houses was from my Estate Agent, when I had my first viewing.
At first I was scared but now, after read this forum, I'm really happy that I bought it.
I've just finished building school and I've been working for 7 years in UK in maintenance, 2 years ago I also got my electrician qualifications. I have a lot of experience with refurbishment, decorating, plumbing and electrics, but I don't have any experience with BISF houses.
I Know that it's only the construction type that is different, but it's also the most important part of house.
I haven't bought the house yet, but I want to be prepared for everything before I have the keys in my hand. After this I will just get on and DO IT!
I hope that all professionals and BISF house owners will help me.
I can promise share on this forum with my all new experience acquired during the renovation.

My first idea:
I read somewhere that in BISF houses I can take out all of the internal walls.
For me it's possible because all weight from upstairs take huge steel floor beams.
Can anyone confirm this?
With external walls I want just make additional doors for toilet and doors from existing kitchen to existing toilet make wider about 60cm.
I worry a little about the water heater tank between bedrooms 1 and 2. If need I to, can I move it or remove it and buy a combi boiler?
I will remove fire and chimney.
I will put some images to help you understand my idea.
Thanks for any help
Tom

No one can confirm that I can take of all internal walls?
Write any comments please
Tom

Hi and welcome Tom! It's a big and exciting task you've got! We were in a similar situation two years ago but as I work full time it has been coming on fairly slowly.

1) A large steel beam across the width of the house in the top of the wall between the living room and dining room, living room/kitchen and hall/kitchen.

3) Another stanchion where the living room/kitchen/hallway meet.

I found this photo of a BISF house where the wall between the living room and dining room has been removed that shows the first two.

Thank you for your response Ed..
That steel beam across the width of the house looks huge and holds just upstairs floor and walls plus furnitures. It's not problem form because I will do 2 or 3 ceiling levels, and will be cover. For me problem are that two steel stanchions. Who can tell me what I have to do to remove them?
1. Any local professional building company?
2. Any building designers?
Other question is that I need any permission to do this job before, or any confirmation, assent after this. Who can do that certification?
Tom

Hi Tom, I've never heard of anyone removing the two stanchions in the middle of the house. Maybe Marc has more information? In theory you could, if you replaced or supplemented the existing steel beam with a larger one. I would think it would be a very big job, if you could even get it into the house.

What you are talking about here is HUGELY SIGNIFICANT structural work, by no feet something you should be underestimating by any means what so ever. To get the interior of a BISF house like that of your picture, the only resemblance of a BISF house that would remain is the fact it has some steel beams in the structure. You would have to speak to a highly competent structural engineer and spent many 10s of thousands of pounds to replace the central steel beam and its associated support, but this aside the one major factor you would be considering in your plans is the fact that you are buy a SEMI-DETACHED property. Any such would would also have HUGE ramifications on the neighbours structure and I highly doubt you would every get the approval to go ahead with it. Not to mention even if you did, the money to do so would make it pointless going to such an effort as you could probably buy a far nicer and more spacious home with the money you would spend.

I know just what you're going through getting excited about possibly buying your first home, I bought this BISF as mine 8 months ago so know how easy it is to get carried away with the plans.

As Ed says, none of the walls upstairs are structural, you can have the entire upstairs open no questions asked and no limitations.

The downstairs has to take the weight of all this, as a result as already outlined has a large RSJ spanning from one side to the other with THREE beams 1/3 and 2/3s and 3/3ds of the way in, one to the right of where the original fire place is, the other just to the right of where the original kitchen/hallway door is and the final one just in front of the party wall as you will see in my picture. You could probably remove the one at 2/3rds without causing too much impact (I would still consult a structural engineer on this) or at least move it in either direction (which is what I was going to do- and yes it does move easily enough as its just bolted in), but the rest I would say are in too critical structural location for me to every suggest doing it.

My suggestion, sadly, curb your ambition a little, spend your time properly on this website doing research into the structure etc and replan accordingly, you can still have a beautiful home far better than any modern property despite some of the BISF structures limitations that have been outlined here.

Good luck and keep us posted 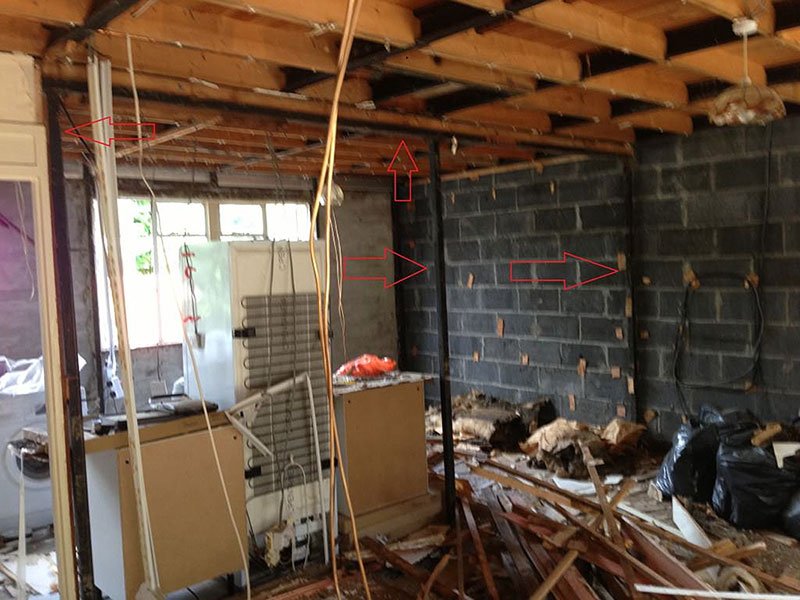 Oh and Tom, sorry to continually be the bearer of bad news, but your plan of opening the kitchen up wider into the outhouse- forget about it, that would involve taking out an entire vertical beam and also the cross brace which gives the structure support against flex.

I almost had too before I hit "post"!. I would also imagine it is mirrored, but given how thin these braces are I would question whether relying on the one the other side could be short sighted potentially, although equally in theory the blockwork goes right up to the RSJ so this may provide a little support too