In 1943 local authorities across the UKÂ  were directed by the government had to assess their long-term housing requirements. In Coventry, the already renowned architect Donald Gibson stated that he believed Coventry would require over 50,000 new homes to be built due to the huge property losses that the city had endured during the blitz.

The government responded to Gibson's request by allocatingÂ  some 2000 BISF houses to the city of Coventry. These houses required less skilled labour to build compared to traditional and very labour intensive brick-built houses and this fact alone offered the tantalising chance of completing government based build targets in good time. Building soon started but by 1946 building materials had already fallen into short supply and the available workforce was down to below 25% of the men needed to complete this enormous task.

Coventrys housing team selected a number of undeveloped sites from around the City. In January 1947 plans were agreed for the building of a brand new estate to be situated alongside the Stonebridge Highway which would include the erection 48 BISF houses.

The bold new plans were described by the local media as â€˜revolutionaryâ€™, and the BISF houses were thought to resemble Scandinavian styling, a look not previously seen in the UK.

The scheme promised residents maximum sunlight and privacy along with the the protection of the surrounding woodland and harmonisation with the nearby areas of natural beauty.

The 23 acre site (93077.69 SqM) was to be built on a sloping south-east bank, currently occupied by mature trees, hedgerows and open land.

Designed as a mixed community of houses, bungalows and flats, the BISF houses were to be sited on the lower southernÂ  area of the site, segregated away from the main estate.

Houses were to be lined up in regular, parallel rows, sitting at right angles to the main road, with traditional back-to-back gardens. They were to be built with their frontages facing away from the main road traffic to reduce noise as privacy and tranquility were key aspects of the estates design. It was as though the designers wanted to create a modern-day utopia with the relative luxury of playgrounds, tennis courts and even boating lakes were planned, fed by a natural stream running through the land and creating much respite for the post-war residents.

The build was severly hampered by acute labour shortages and by August 1946 progress on the sites had slowed to a snail's pace, causing the Government to make the drastic decision to withdraw half of the cityâ€™s planned BISF house allocation. By 1947Â  BISF houses city-wide were further threatened by acute labour shortages, forcing contractors to import expensive labour from other areas of the country just to be able to continue the work and protect existing contracts. Coventry Council tried to obtain Government funding to finance these spiralling costs but their requests for assistance were refused. In the end the council was forced to cover these costs by accepting fewer government-funded BISF houses, thus releasing much needed finance.

The city only managed to erect around 500 BISF steel framed houses, which is around a quarter of those originaly planned. The majority of the cities BISF stock were built on the Charter Avenue Estate at Canley.

Only one row of BISF houses was ever completed on the Stonebridge site and even these were interspersed with traditional brick built semi-detached houses. This was surprising considering that at the time 2 unskilled men were said to be able to erect a BISF steel Frame in just two days or Four men in one day but only if the foundation pad had been constructed and subject to the correct materials being delivered on site.

During later years into the 1950s and still under considerable pressure to provide housing for the population of the City, companies such as Wimpey appeared on the estate and constructed blocks of 'No Fines' flats which had a major impact on the overall feel of the estate and moving away from the utopia like feel that was originally planned.

We have searched the area around the Stonebridge Highway and to date have been unable to identify the small group of BISF houses described above. Are you aware of their location today or have they since been demolished?

If you have any further information to add regarding BISF houses in Coventry then please share your thoughts in the comments section below.

Fascinating post! From the description of the layout of the houses could they just possibly be these:-

Could they be BISF houses that have been bricked up? I'm thinking no, the windows aren't the right shape, but the chimney position is very BISF-like and the corrugated roofing is too.

I have a strange feeling that could a Wimpey house possibly a no fines that has been re-bricked but I'm not 100% sure as they aren't my forte.
The internal layout though similar doesn't seem to match either.
You will see what I mean when you view the below images.

Saying that though the Wimpey houses were built around the same time in the area so you could be very close. 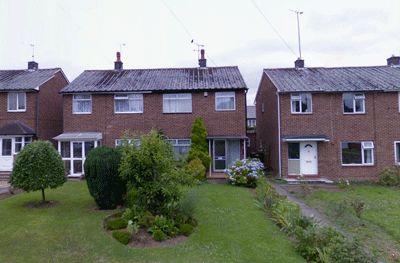 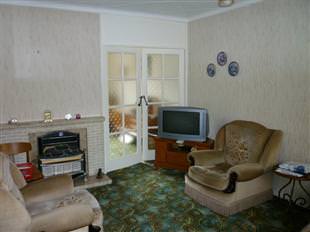 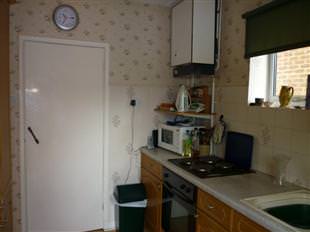 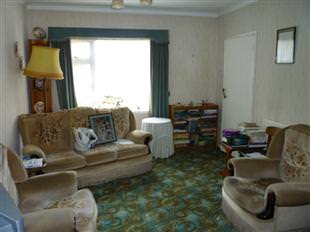 You're right, looking again the chimneys are too far apart to be BISF houses and there is glazing next to the door where there is a diagonal brace in a BISF that would be difficult to remove.

Maybe the journalist made the common mistake of confusing different types of system-built house and in reality no BISF houses were ever built there?

It's always a possibility Ed, I'm waiting to speak to a contact at Coventry Council who may be able to shed some light on the missing houses.

I'll update as soon as I have an answer.

I did a quick google search for BISF houses in Coventry and couldn't find anything specific. Some results did mention a Coventry Corporation steel-framed house which seemed to have been a different type of system-built house. I couldn't find a photo though, so maybe they don't survive.

These houses can be found on the Canley estate. Try Scarborough Way, for example. The houses can be seen from the west coast rail line too. Still going strong.

I've just had a look a Scarborough way and as you say the houses are indeed still going strong. I was also surprised to see so many houses in near original condition which is always good to see as stock condition houses are becoming more of a rarity these days as time goes by.

Yes, as far as I can remember there were "iron houses", as they were known, in Canley. I also think there were some up along Charter Avenue but I can't be sure. My father (Tom Dufton) was director of building services until 1984. A considerable amount of time was spent working out how to bring them up to standard during the the late sixties or early seventies. I think they tended to lose heat and better insulation was looked at among other things. I think there was an effort to keep them in good repair because of their historical interest and also because the residents were attached to them but they were expensiveand not all that easy to maintain. It is possible the Building Research Station was involved. I should say that there will be mention of them in the Housing Committee Minutes from around that time.